Beyond Duality and Polarization 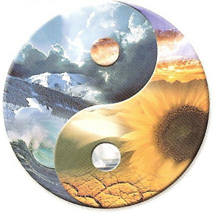 Where the old paradigm is often caught up in the drama of duality and polarization, the new paradigm embraces the fascinating concept of a holographic universe. Quantum physicists are increasingly finding that life is holographic in its essence.

To better understand the meaning of the term holographic, consider holography, which is a specialized branch of photography. Using a sophisticated process with lasers, an image can be recorded on holographic film. When lasers are then shined through that film at the precise angle used in making the film, an intriguing three-dimensional image appears to the viewer.

Note that this is quite different from the process used with holograms on credit cards, which are visible to the eye using natural light. Under natural light, the type of holographic film discussed here does not present any coherent picture. Only when lasers are directed through the film at the correct angle does the three-dimensional image appear. For an example, click here.

The amazing thing about the holographic process is that the whole image is contained in each part of the film.

For instance, if the image of an apple on this type of holographic film is illuminated at a certain angle by a laser, a clear, three-dimensional image of the apple becomes visible, as if through a window the size of the film. Yet if you then cut the film down the middle into two halves and illuminate each one separately with a laser, you find that the entire apple is still visible in both halves of the film. The only difference is that now you're viewing the apple through a narrower "window."

Key physicists and inspirational speakers are increasingly discussing the holographic nature of the universe. In this view, all that exists is somehow folded within the essence of every being in the same way that every fragment of holographic film contains the 3-D image of the whole apple in the example above. Please read the fascinating eight-page essay below for exciting scientific explorations of the holographic nature of reality.

All of this has incredible implications if we open to the deeper meaning and wisdom involved. Though to most of us, the universe appears to be outside of ourselves, maybe it is equally contained within us! Maybe we not only have unlimited energy within ourselves, as discussed in the previous lesson, but also unlimited knowledge, wisdom, love, and full access to all of existence!

If we extrapolate further, could it be that when two people meet, deep unconscious processes interact with conscious awareness to determine what parts of the universal hologram contained within these two beings most resonate, and are thus drawn out of the infinity of possibilities into conscious awareness and action?

Consider that when we move with clear, powerful intention in our lives, the unconscious part of the above process may be brought ever more into conscious awareness. By moving with clear focus and direction, we can more consciously evoke from the universal hologram of existence the parts which most resonate with our intentions.

When we consciously open to the infinite love, energy, and All That Is contained within us with clear intentions, we can not only enrich and expand our own being, we can also inspire those around us to do the same.

The Power Elite as a Part of Ourselves

So how do the major cover-ups and power elite mentioned in these lessons fit into all of this? If we are all part of a universal hologram, could this elite somehow be a disowned part of ourselves awaiting healing and integration? Could the entire external world in some way simply be a resonant reflection of all that is going on within us both consciously and unconsciously? Could it be that both individually and collectively, we are all somehow co-creating each other and everything that happens in our lives?

Even as the new paradigm is rapidly spreading on our planet, it appears that a significant part of ourselves and of humanity in general is resistant to change. This resistant part seems to be rebelling against the impending change by pushing towards polarization as far as possible. This part of ourselves manifests outwardly as a manipulative power elite doing everything they can to control the planet for their own good. Yet they may only reflect an internal part of ourselves which fears change and wants to control and protect us.

Is this bad? Isn't it natural for people to fear change and fight against it, believing that the known is somehow better than the unknown? Aren't there parts of each one of us that fight against change and want us to be safe and secure where we are right now? Can we accept those parts? Can we become friendly with them and open to the learning contained therein? Can we even learn to dance with them – to dance with all parts of both ourselves and the universe?

If we choose to open to the holographic interconnectedness of all beings, we can welcome all parts of ourselves – including those that fear change and those that welcome it – as essential and integral parts of our individual and collective being. We can honor the unique gift of each person while inviting all beings to join in an ever more harmonious dance of love and joy.

Each one of us who joins in this intention cannot help but make a significant difference in our world. We invite you to open to finding a place of acceptance and honoring for all people on our planet. By taking full responsibility for our lives and opening to the holographic interconnectedness of all beings in our universe and all parts of ourselves, we can powerfully spread the new paradigm in both our lives and our world.

The only way to find your Self is to lose your self.  ~  Jonathan Kolber

Image from the intriguing Coral Castle

For Those Who Want More

This landmark book beautifully depicts scientifically and philosophically how everything is much more interconnected than we are led to believe. Using cutting-edge scientific theories and experiments related to the holographic nature of our minds and universe, Talbot shows how powerful our minds are in affecting and even creating the reality in which we live. Chapter four's amazing examples of miracle healing is especially engaging. Very well researched with lots of footnotes.

The full title of this fun, highly optimistic book is Pronoia Is the Antidote for Paranoia: How the Whole World Is Conspiring to Shower You with Blessings. Pronoia is the opposite of paranoia – you think everyone is out to support you. Brezsny writes in a lyrical, irreverent, unconventional style. Throughout the book there are many interactive sections, provocative questions, exercises to try, and journaling ideas. Be prepared, however, that these aren't traditional exercises you'd find in a "normal" book. They are wild, wacky, and wonderful – just like the book.

This fun, educational film employs clever animation to unfold the radical knowledge that modern science has unearthed in recent years. Powerful cinematic sequences explore the inner-workings of the human brain. Quirky animation introduces us to one of the smallest forms of consciousness in the body – the cell. Dazzling visuals reinforce the film's message in an exciting, powerful way. Done with humor, precision, and a refreshing irreverence, these scenes are only part of what makes this film unique in the history of cinema.

This delightfully inspiring website is filled with relatively short, moving video presentations by some of the world's greatest thinkers and doers. Powerful speakers from around the world are invited to give a talk of about 20 minutes covering whatever topic most ignites their passion. If you want to relax and have fun while being inspired, this is a great place to spend some time.

You are now ready for lesson 11, the final lesson of the Hidden Knowledge Course. This lesson includes some awesomely inspiring material to bring the course to a close. Thanks for joining us on this transformative journey.

The Hidden Knowledge Course is part of the PEERS empowerment network